In this article, I will introduce you to flamegraphs, how to use them, how to read them, what makes them unique, and their use cases.

What is a flamegraph#

A flamegraph is a complete visualization of hierarchical data (e.g stack traces, file system contents, etc) with a metric, typically resource usage, attached to the data. Flamegraphs were originally invented by Brendan Gregg. He was inspired by the inability to view, read, and understand stack traces using the regular profilers to debug performance issues. The flamegraph was created to fix this exact problem.

Flamegraphs allow you to view a call stack in a much more visual way. They give you insight into your code performance and allow you to debug efficiently by drilling down to the origin of a bug, thereby increasing the performance of your application. 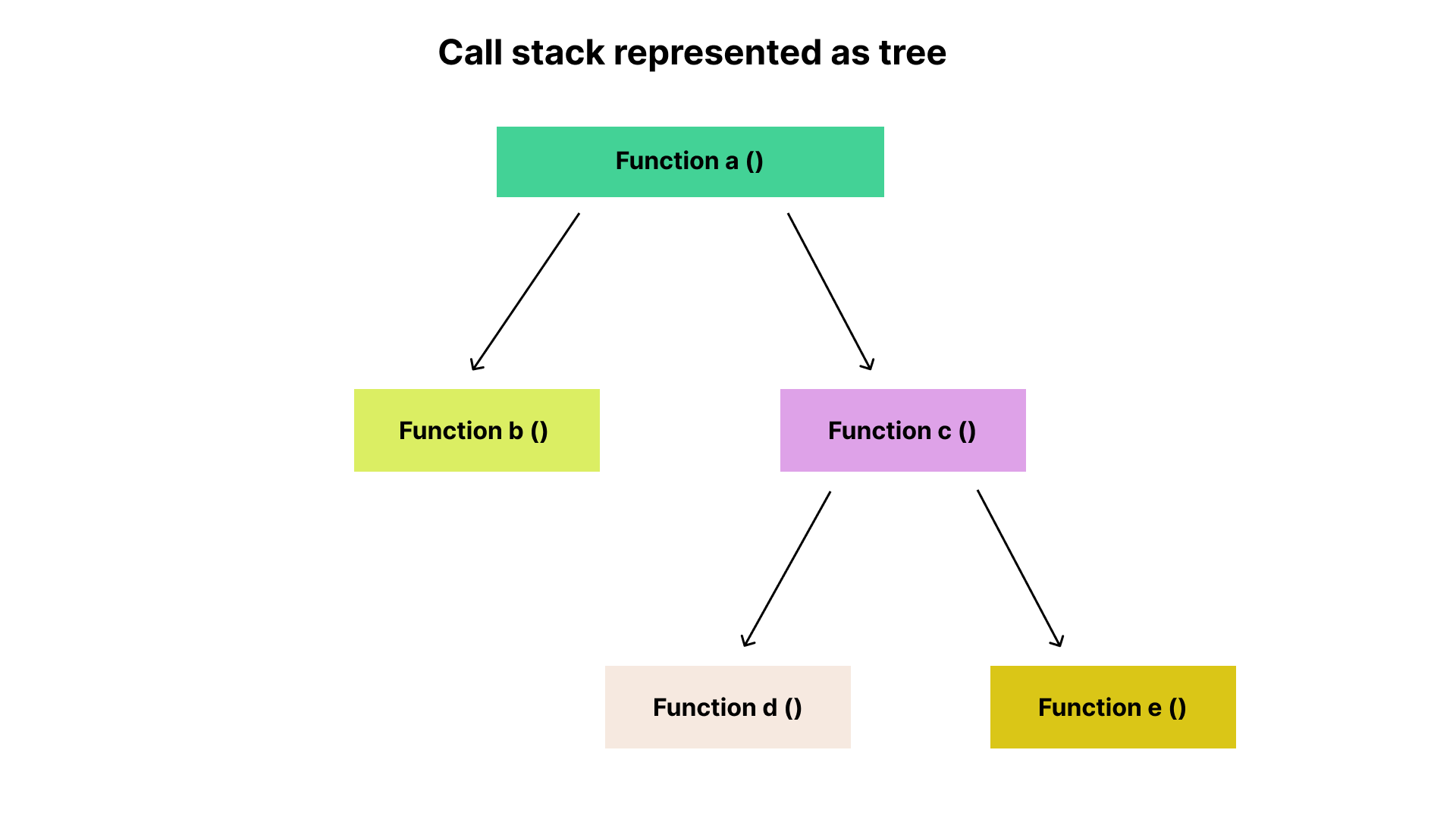 Flamegraphs are generated as a by-product of software profilers. They are represented in a tree-like structure where a node connects to another node to show their parent-child relationship. This corresponds to a call stack where one function calls another until it gets to the last function in the stack. The tree structure is then converted into a collection of boxes stacked together according to their relationship. This is known as a flamegraph. 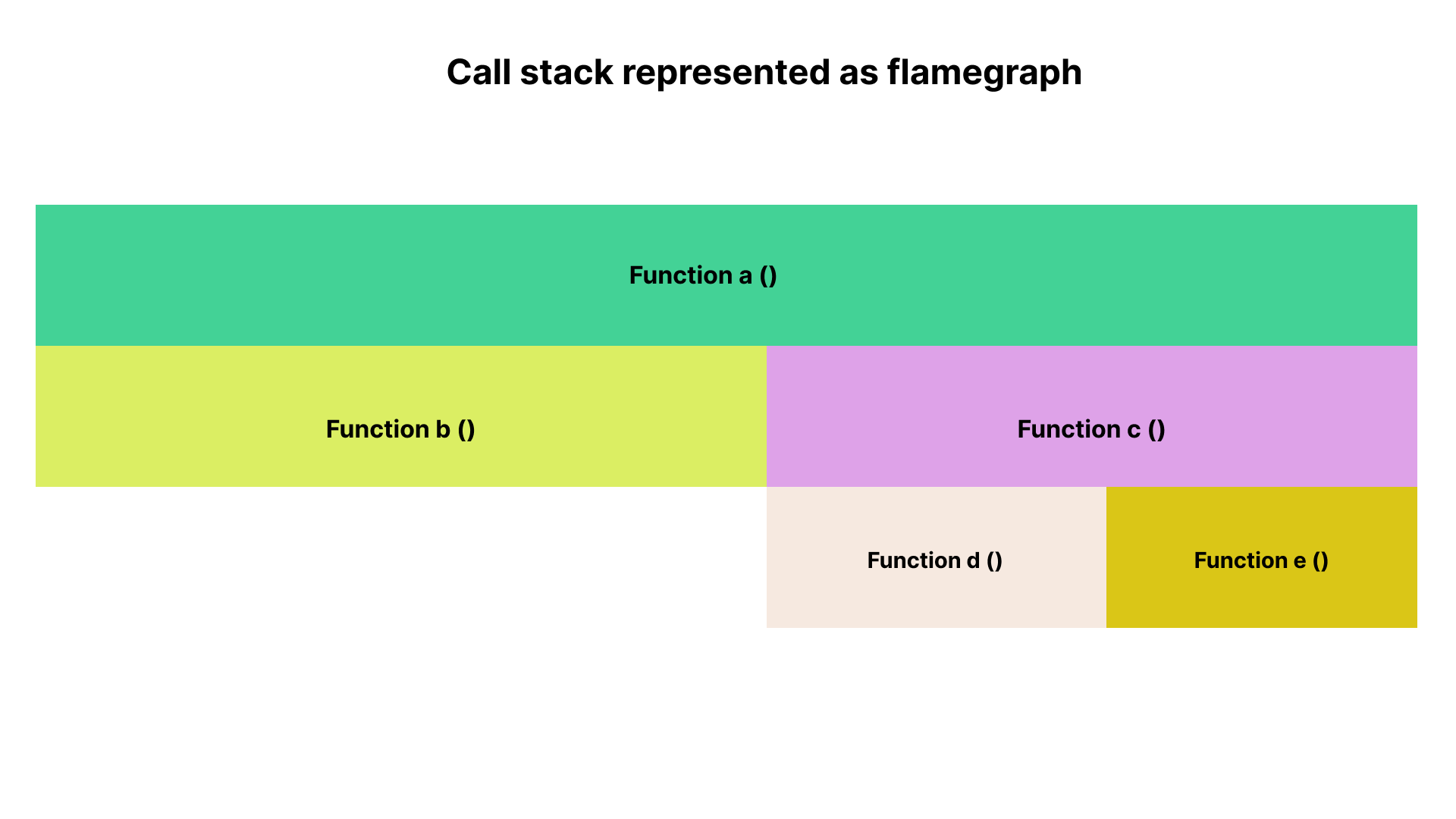 Example use cases for flamegraphs#

Flamegraphs are often seen as more of a high level or abstract concept, so here are some situations where flamegraphs would be useful.

Imagine a scenario where you’re the only engineer in your team that is on-call for the week. Days passed and thankfully, you don’t get any outage alert. On the last day of your on-call, you get a pager duty alert showing a spike in latency in the US-east region. You start by checking the metrics and then logs. In the course of your investigation, you notice the problems go even deeper in the stack.

In a scenario like this, you begin to find ways to visualize CPU usage and identify what’s consuming your CPU resource the most. That is exactly where flamegraphs shine!

Let’s assume you work in a team fully focused on improving the performance of your company’s product. While doing your normal morning routine, you notice an escalation from customer support. A customer just reported an unusual delay in load time. Looking at your graph, you notice a spike in latency in the US-east region. In the course of your investigation, you begin to notice the problem goes even deeper in the stack.

In a scenario like this, you begin to find ways to visualize CPU usage and identify what is consuming your CPU resource the most. That is also where flamegraphs come to your rescue!

Flamegraphs are the best way to visualize performance data. They allow you to have a full view of your computing resources and how they are utilized, in one single pane.

In an industry where software changes fast, it is important to quickly understand profiles. Flamegraphs do a good job of visually representing the state of your application. In other words, when something goes wrong, you’re able to quickly identify the difference between an ideal “efficient” state and the buggy “inefficient” state.

Pyroscope, an open-source continuous profiling platform, provides you with sleek flamegraphs to easily visualize your performance profile data. Pyroscope simplifies the entire process of collecting, converting, and analyzing profiles, thereby allowing you to easily focus on the things you care about the most. Pyroscope extends the functionalities of flamegraphs by allowing you to perform actions such as:

How to interact with a flamegraph using Pyroscope#

Pyroscope provides different ways of interacting with or using their flamegaph:

How to interpret a flamegraph#

You can read a flamegraph by first understanding its features. They include:

With everything you've learned so far about flamegraphs, feel free to play around and interpret this interactive flamegraph embedded below.